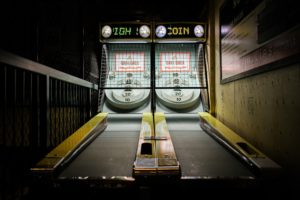 “Only you can prevent….” —Smokey   LYLAS The ice cream truck is coming. Get moving. Raleigh yanks a drawer: a thatch of utensils skids toward the light, but no loose change. The next drawer resists her tug—promising! Maybe the previous…

In the creative writing classroom, the instructor must steer clear of “lore.” Lore is anything that mystifies the process: muses, superstitions, “genius.” What students need are tools. Dissection kits. Models. In short, craft.

But you and I are not in a classroom. So come close, my dear, and hear my tale.

The excerpt published here is an opening, but these pages are the last I wrote. They came to me by magic, delivered nearly whole cloth by some angel or fury, some weird sister on the heath.

The tooth fairy comes when your baby teeth fall out. You have to slip those gnarly little ivories under your pillow and sleep on them. So what do you have to do to summon the first-chapter fairy?

The incantation is not simple. The first thing into the cauldron is time. The manuscript from which this excerpt derives is the result of four years and three drafts, though parts have been with me much longer. The original first chapters took awhile to realize that they had chewed all they could; the time had come to fall out or be pulled.

A manuscript also needs space, which in my case means many miles of walking without headphones (the better to hear what haunts you).

Next you will need to offer up your secret obsessions. As soon as I committed to writing about bears, bear stories began to accumulate. I saw them everywhere. Bears turn into princes (fairy tales). Women turn into bears (mythology). Bears frolic in above ground pools (YouTube). This odd but specific fixation, along with a short list of others (flawed mothers, charged relationships with food), formed a constellation that made some kind of sense to me. Stars to steer by.

However, this part of the process also necessitates a vow of silence. The more you describe to people the stories you are going to write, the less compulsion you will feel to write them. Keep this vow longer than seems necessary. Psyche ruined her relationship with Eros by unmasking him too soon. The head and the heart are lovers, but only in the dark.

My lore may not be of any use to you; really, you should fashion your own. Magic is a truce you make with a charlatan. It’s a hundred children in an auditorium clapping to bring Tinker Bell back to life. It doesn’t have to be real to be transformative.

Craft and witchcraft are neither equivalent nor mutually exclusive. The well-lit creative writing classroom is a great place to study, to work. But it might be worth taking a walk through the midnight territories, where strange women anoint the kings, and a fairy stalks from pillow to pillow in search of used teeth.