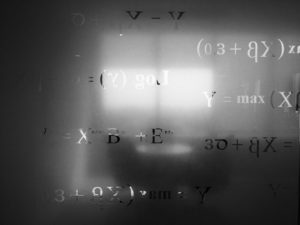 The Pythagorean Theorem In a photo of her when she was eight months pregnant with me, my mother looks up at the camera. High sun. Her sweaty hair clinging to her jawline. A powder blue top swinging in the…

All three of these microessays were crafted at different times in Kathy Fish’s Fast Flash Workshops in the first year of the pandemic. I live with Complex Post-Traumatic Stress Disorder and not only had I lost the majority of my coping methods with the world shutting down, but I also got separated, sold a house, and moved five hundred miles from the only home I’ve ever known. I needed prompts because my brain was in a constant state of fight or flight, which leads to a lot of physical symptoms, difficulty concentrating, and often, dissociation. Kathy’s workshops have been a godsend for me as she is able to get me to let go of the anxious, overthinking side of my brain and let the subconscious take over and tackle subjects I’ve never had the guts to tackle.

“The Pythagorean Theorem” was my response to the instruction to write the story of a photo that haunts you. I have held back from writing about my mother over the years. It’s complicated. Beyond complicated, because I barely know her. I wanted to capture this image of her pregnant with me, the sadness and desperation in her body language and in my elder sibling’s as well. They were living in an abusive situation I was about to be born into, and though I have deep anger at my mother’s conservative—now bizarre QAnon—worldview, I still have empathy and compassion for all she went through, what she got us out of, and the complexity of navigating it all; hence, the triangles as a metaphor for my internal conflict.

Like my short fiction, my creative nonfiction is always in conversation. Think Faulkner: every piece is connected. Just before writing “Every Mass Attracts Every Other Mass in the Universe,” I had been listening to a lot of astronomy podcasts, so I was thinking about the nature of time, how I find the laws of physics comforting and often just flat-out weird. I look for synchronicity, for patterns, and leading up to the release of my second book, I could not help but reflect on my first book, which was published two weeks before my beloved grandmother’s death. There is more dissociation here, but there is also reaching for connection as I always am, and seldom feel.

And finally, with the series “There Is News Along the Ohio River, I-III,” which is likely to be a book (IV-VIII have been published in Five South), I am simply trying to cling to this world, to be present despite my shattered heart, to acknowledge that beauty still exists. Since my move to Louisville, I’ve spent the majority of my time alone and my only solace has been walking the Big Four Bridge, which connects Louisville, Kentucky, to Jeffersonville, Indiana. I believe these walks have saved my life. Each piece starts with the same line like Terrance Hayes’s brilliant American Sonnets for My Past and Future Assassin. I hope the repetition mimics the movement, the volatile and steadfast nature, the coexistence of calm and wild in this place. Writing this series is my attempt to illustrate and share all I’ve witnessed on the river and how it has affected my mental health.