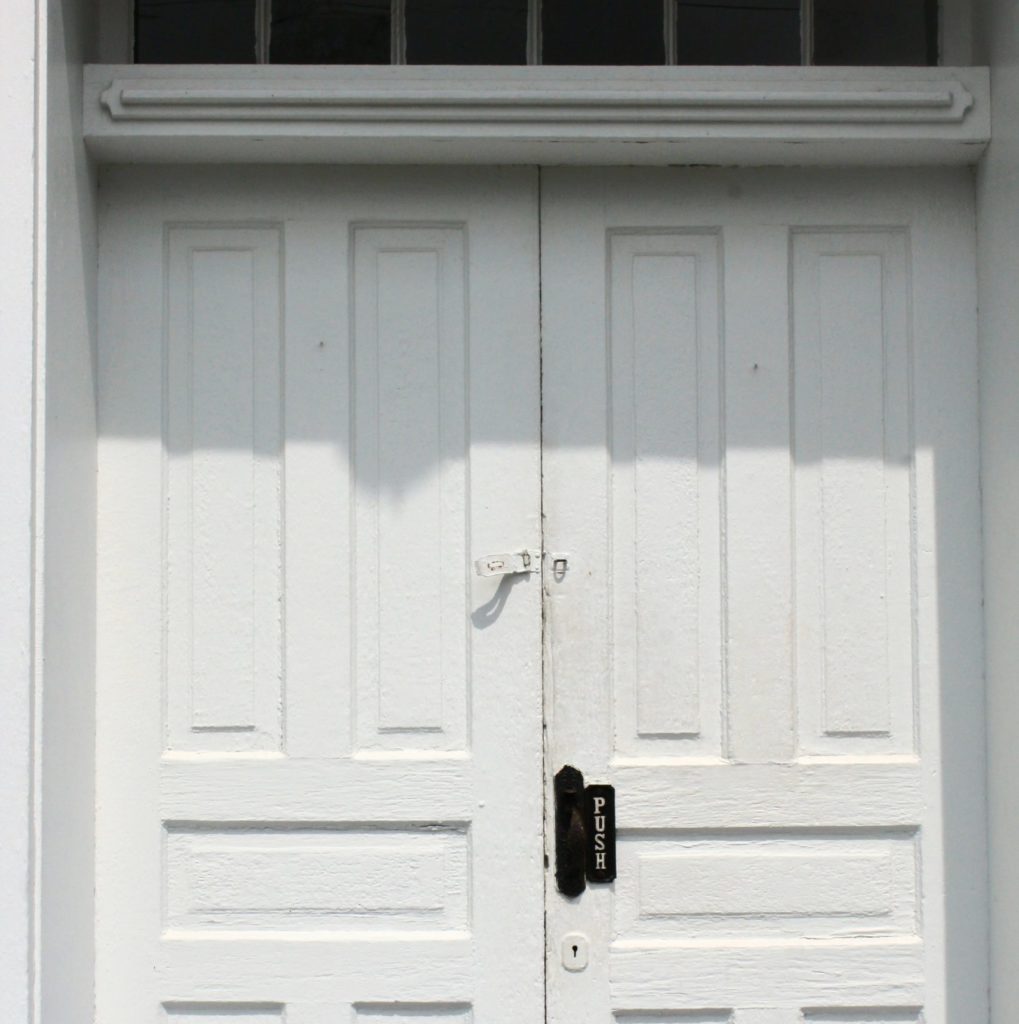 In her nonfiction flash “Kept,” Jane Marcellus employs child’s narrative point of view and objects and sensory impressions pulled from the depths of childhood memory to show more than she knew at the time. The Moores’s house next door is permeated with the vivid smells of baby powder and baby lotion mingled with the stink of the diaper pail. Her memory is visceral: “I looked away, trying not to gag.” The objects she recollects take on metaphorical resonance: the bookshelf in the living room, displaying a wedding album but devoid of books; the hardened slice of wedding cake preserved in the freezer. “You’ll have one just like this when you get married,” Linda Moore assures her. Marriage, like motherhood, was “a thing that would just happen. It couldn’t be helped.” By using child’s narrative point of view, Marcellus underlines the powerlessness of both the child and the young wife in the face of oppressive expectations they have no language to describe. At age twelve, the child is puzzling through the “rules”: “I understood, vaguely, that once you were married, you could no longer be ruined. That was the rule in 1968.” She will need to be “kept” by a babysitter and then become a stay-at-home housewife and mother kept by a husband to avoid being “ruined.”  Linda can “safely” hike up her wedding dress only with her husband on their wedding day.

“I think children are still trying to articulate raw experience, unencumbered by adult language,” Marcellus points out in her author’s note, “so their perceptions can offer insight into what is otherwise unsayable.” Linda’s joking comment about her bruise is beyond what the child can take in, implying worlds about marriage and safety in 1968, evoking a moment of fear the child can’t put into words until many years later.  —CRAFT

Moores lived next door. He worked construction; she stayed home. I don’t know how old he was, but I remember that on her birthday, she turned twenty-two. It seemed old. I was twelve.

Moores had a baby, Sidney. Their house smelled of the things you needed to take care of a baby in 1968—baby powder and baby lotion and Ivory Snow and formula. Mostly, it smelled of the diaper pail in Sidney’s bedroom. You smelled that first when you walked into the house.

Linda Moore kept me while my parents worked. That’s what everyone called it, “kept.” I knew it created a problem and I offered to solve it by staying home alone, but my father said someone might come to the door and kidnap me and then I would be ruined. I didn’t know what he meant by that, just the rule: to avoid being ruined, I had to be kept.

Linda liked to show me things. The built-in bookshelf in the living room was nearly empty, but in the middle, lying flat, was their wedding album. Linda liked to show me the photos. In one, she hiked her long white dress over one knee to reveal a lacy garter—a flimsy thing, its sole purpose this moment, after the ceremony, when she had become a married woman and could safely hike her dress up to show her new husband.

In another, she and Max fed each other wedding cake. Arms interlocked, they each put a bite in the other’s mouth.

“Do you want to see?” she asked one day. She meant the cake. She still had a piece in the freezer.

I didn’t, particularly, but said okay, since there was nothing else to do. In the kitchen, she opened the freezer. The ice grew thick, encroaching from all sides. It needed defrosting, she told me. She reached behind some meat wrapped in white paper labeled “pork chops” and “hamburger” in Magic Marker.

“Here it is,” she said, pulling out a small white box. Inside, the cake had shrunken slightly and was hard. You could see what was left of an icing rose, smashed on one side. Later, when I learned about Vladimir Lenin’s preserved corpse, I would think of Linda’s wedding cake.

I understood, vaguely, that once you were married, you could no longer be ruined. That was the rule in 1968.

The baby cried. Linda returned the cake to the freezer and I followed her into the bedroom. She unpinned Sidney’s diaper. It was wet and dark and it stank. I looked away, trying not to gag. In a minute, I knew, she would take the diaper to the toilet and scrape it off and put it in the pail where it would add to the stink that permeated the whole house, except, I guess, the space inside the freezer that was shrinking as the ice grew around the pork chops and hamburger and wedding cake.

Sidney still cried, wild and red-faced. She wiped his bottom with a cloth and put that in the pail and put on powder and a clean diaper. She used big safety pins that were blue and shaped like teddy bears. You had to be careful not to stick the baby, she said. It seemed unfair that a teddy bear could be dangerous.

In the kitchen, she warmed formula in a pan of steaming water, then took Sidney to the living room to sit on the couch and feed him. I sat on the floor nearby.

It was summer. Her legs were bare. I noticed a bruise, large and dark like a stain, just below her knee. She saw me looking.

She laughed a little when she said that—a short high nervous laugh, so you might have thought she was joking, except she wasn’t.

I said nothing, but later, after Moores moved away and we moved away and I hadn’t thought about Linda or Sidney or Max or that day for a long time and then did, I remembered how the fear felt cold and hard like metal inside me, and how there was no one to tell. By that time I realized twenty-two was young—young enough to remember the possibility of twelve, young enough for a woman to ask if she could keep herself.

That afternoon, she held Sidney over one shoulder and patted his back until he burped.

“Would you like to hold him?” she said. “You can practice for when you’re a mother.” This incident haunted me for decades. One day when I was working on another writing project, the first lines presented themselves. I wrote them down to get them out of my head but didn’t develop the essay right away. It was such a dark little memory that I didn’t want to go there, but it kept knocking—wanting to be written.

I like memoir written from the perspective of childhood. I think children are still trying to articulate raw experience, unencumbered by adult language, so their perceptions can offer insight into what is otherwise unsayable. The trick is to get out of the way and let the childhood voice emerge on its own terms. If you’re writing about something that happened when you were twelve, it’s important to let the diction be that of a twelve-year-old. For example, I would not have said “domestic violence” because I had never heard that term. A Google search tells me that the phrase wasn’t even around yet, but even if it had been, using it would have taken away from the twelve-year-old’s perceptions.

I also like metaphors and have noticed that they have a way of arising organically in memoir. Our memories give us the details we need to give a story meaning. An object can be both literal and metaphoric, which I find fascinating. The bookless bookshelf, the scent of the diaper pail, the teddy bear safety pins, the ice, and the cake function as metaphors, I realize now, but I didn’t think about that when I was writing.

It was in revising that the word “kept” became more meaningful. In my childhood it was a synonym for babysitting, but of course it also refers to women’s economic powerlessness. When I started trying to reflect on what this experience meant to me, the word (as “keep”) emerged again in the long paragraph near the end. (Thank you, subconscious!)

Finally, I like the idea that we writers are multiple selves—the ordinary self, the writer self, the narrator self, the character self. In my case, this morning, my ordinary self feeds the cat and runs the vacuum, while my writer self makes sure the printer has paper, my narrator self directs the story as it unfolds, and my character self emerges on the page. While writing this note, my ordinary self was curious about that house. The Zillow real estate website showed me interior photos, and I spent some time admiring vintage details—gorgeous hardwood floors, kitchen cabinets we would now call retro, and of course, that built-in bookshelf. Wow, I could live there, I thought. But then I remembered that for character-me, that house would always be haunted.