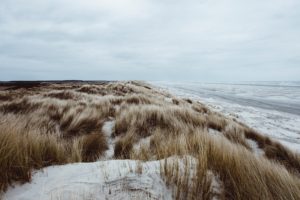 When I first started writing this story, some time in 2017, I would have been hard-pressed to explain the concepts of “voice” or “craft.” I had been writing fiction seriously for only a couple of years and was still trying to work out how to become more deliberate in my choices. The stories I loved best seemed almost magical, as if their power was innate and not a carefully constructed work their author had labored over. But something happened as my story came together: I saw that I was developing a style, leaning toward a set of interests that has haunted my fiction ever since.

On the surface, the story is about a married couple trying to make do in a comically trying situation—attempting to live on a small boat with their precocious nine-year-old daughter, whose synesthesia prompts her to assign numbers to colors—but quickly it becomes more about our very human fear of things unraveling. The idea that we can spend years carefully constructing emotional safe harbors—rituals, ways of behaving, rules we set for ourselves and the people around us that are supposed to guard against harm—only to have them swept away by forces out of our control.

I decided the best way to create this atmosphere was to initially place the perspective with the parents (natural proxies for our own adult anxieties and worries), then as the narrative approaches its climax, switch to the point of view of the little girl. This allowed me to use the naivete and innocence of the child, who doesn’t see any problem with taking shelter in a strange man’s cottage in a storm, to ratchet the tension before switching back to the POV of the increasingly hysterical parents searching for their missing child.

I’m very drawn to worlds in which characters are leading fairly mundane bourgeois lives while something not-quite-right is brewing just out of frame. On the one hand, there’s cozy domesticity with all its attendant irritations and comforts, but on the other is this unnamed ambient menace, a wild threat stalking the periphery of all that careful order. These are my absolute favorite kind of stories: ones rooted in the domestic but suffused with rising dread. The reader is never permitted to quite get comfortable. Things seem ostensibly normal, these characters seem safe enough in their lives—working their little jobs, raising their quirky children, deciding what to have for dinner—so why do I as a reader feel so uneasy, like I’m going to jump out of my skin?

In attempting to capture that very singular feeling, I turned to the master atmospherians who have cornered this kind of storytelling. I revisited Kelly Link’s acclaimed story “The Stone Animals,” which is by turns funny and creepy, Carmen Maria Machado’s beloved twisted fairytale “The Husband Stitch,” and Joyce Carol Oates’s classic shiver-fest “Where Are You Going, Where Have You Been?,” as well as Jo Ann Beard’s seminal braided essay, “The Fourth State of Matter,” trying to work out how they created the narrative dark magic that propels their storytelling.

I’m not sure I will ever get close to the suspenseful mood—the can’t-get-it-out-of-your-mind stickiness—of those brilliant pieces, but the trying is exhilarating.

EMMA SLOLEY’s work has appeared in Catapult, Literary Hub, Yemassee Journal, Joyland, The Common, Structo, and The Masters Review Anthology, among many others. She is a MacDowell fellow and a Bread Loaf scholar, and her debut novel, Disaster’s Children, was published by Little A books in 2019. Born in Australia, Emma now divides her time between the US and the city of Mérida, Mexico. You can find her on Twitter @Emma_Sloley and emmasloley.net.