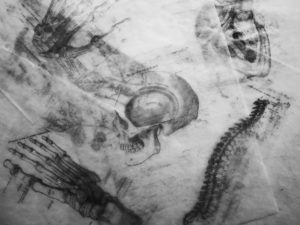 My father, after slipping backward on a stretch of rooted Alaskan ice and hitting his head, miraculously walks the three miles to get back home—heavily concussed and alone—with our two unleashed labs directing him in the winter dark. He…

“Even Though He Fell” started off as an idea in my Notes app simply titled, Essay that repeats itself. I knew it was going to be about my father’s concussion, and I knew it was going to be about mine too. What wasn’t so clear was how I would be able to show my confusion, isolation, and panic. For me, my father was the person I could rely on during my parents’ divorce, who cared for me when I had migraines, and so when he had a concussion, I was thoroughly shaken. At the time, I didn’t have the tools to properly work through how I was affected. Instead, I studied essays such as “An Avalanche’s Lessons in Grief” by Christy NaMee Eriksen and “Tennis Is the Opposite of Death: A Proof” by Joy Katz, which both weave in larger themes about fathers and what they leave behind. Their use of avalanches and tennis, respectively, reveals how fathers imprint themselves onto us by their passions and the environments they foster. Once gone, these unassuming imprints become anchors in processing traumatic events.

When I write, I see myself as an archeologist who digs at the earth until the skeleton of a story is revealed as a jumbled mess. The story won’t be reconstructed perfectly, but what’s important is the pieces exist. This essay’s structure is fractured, imperfect, and disorienting at times because I wanted to convey how the fall still rattles me. The backbone I finally found was to use the little knowledge I had of coding to process these intensely emotional moments. Programming is often a frustrating and solution-oriented skill, wherein a single error can prevent the rest of the code from working. The “error” I couldn’t stop thinking about was how helpless I felt living multiple states away from my father. I have constantly wondered what would’ve happened had I been there; what would’ve happened if he hadn’t called me; what would’ve happened if he’d never made it home. The questions are repetitive, unrelenting, and exhausting. Though through the turmoil, coding allowed me to contextualize my father’s concussion and uncover how vulnerable both of us turned out to be.

MAXWELL SUZUKI is a queer writer who lives in Los Angeles. Maxwell’s work has appeared or is forthcoming in Lunch Ticket, South Dakota Review, and Cheat River Review. He is the prose editor of Passengers Journal and reads for Split/Lip Press. He is writing a novel on the generational disconnect between Japanese-American immigrants and their children. Find Maxwell on Twitter @papasuzuki.