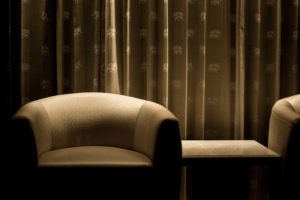 The trick is to write about the body without deploying the body, which has been strained by overuse and anyway tends to make objects or corpses of us: the animals in question. And, we are such animals; my sister…

The Writer by Matthew Raymond I never met Paul Bowles, but he was still alive when I passed through Morocco in the summer of 1998. He died the following year, and it is one of my great regrets, these twenty years later, that I…

In the mid- to late-1990s, when I was just out of college, I nursed a literary obsession with Paul Bowles. He was still alive then and books both by him and about him—and about the Tangier of his time—often appeared on the remainder tables of the various book stores I routinely ambled through. His work and the example of his life fueled my own early attempts at writing and, in some ways, my own decisions about what I thought it meant to be a writer.

My fascination turned into several years of travel, along with flirtations with—or fantasies of, rather—a certain kind of expatriatism. It didn’t take long for me figure out, however, that I wasn’t like Bowles in many ways, that the world I was living in was not the one he so confidently inhabited, and that my writing—like my life—thrived on different energies than his. But a lengthy trip through Morocco was part of the learning process, and it was one of the highlights of those years.

After spending a long time attempting to turn my experiences of that trip into fiction—and having, according to the publishing gods, limited success—I began writing a more direct recollection of my time in North Africa, trying to remember the honest details of that younger and more heady time in my life. However, it wasn’t long before the memoir refused to stay in the nonfiction lane, veering off into a somewhat fictive realm, becoming what I learned later to call a speculative memoir. Thus, “The Writer”: an exercise in wish-fulfillment that at the same time holds up a mirror of sorts to my own inadequacies and disappointments.

I never met Bowles. I wish I had. I wish I had been the kind of person who would have sought him out and asked his advice and made some sort of connection. But perhaps if I had I would have been disappointed: reality rarely matches up with our imaginings. Maybe authors should remain those faint figures who occupy only an oblique, shifting place in our minds: real, unreal; present, absent; friend, stranger. Maybe it’s like what Italo Calvino said in If on a winter’s night a traveler: “…the true authors remain those who for him were only a name on a jacket, a word that was part of the title, authors who had the same reality as their characters, as the places mentioned in the books, who existed and didn’t exist at the same time.…”

MATTHEW RAYMOND has a BA in English from the University of California, Santa Barbara. He is the author of the chapbook The Muddy Season (Black Lawrence Press, 2016). His writing has appeared in or is forthcoming in the Gettysburg Review, Massachusetts Review, New Letters, Free State Review, Pidgeonholes, December, Beloit Poetry Journal, Permafrost, and other places.