Moores lived next door. He worked construction; she stayed home. I don’t know how old he was, but I remember that on her birthday, she turned twenty-two. It seemed old. I was twelve. Moores had a baby, Sidney. Their… Essay by Jahzerah Brooks • The Eight Mile Suspended Carnival is, at its core, a story about tearing down and building up. In this debut novel set against the backdrop of a working carnival and a wartime munitions factory,… 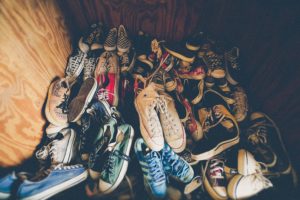 Later, after my uncle’s suicide, the gun cabinet would be moved into the attic, but in the early eighties it still stood in the upstairs hall, just outside my bedroom door. An unassuming wooden display case with twin glass-paned…

The Hierarchy of Soup by Amber Wong Fan Jou Suri Served at the end of a meal, fan jou suri isn’t a dessert. Or, technically, a soup. But for my brother and me, youngsters living in Boston in the early 1960s, parents pinching every penny, fan…

Last Cut / No, No One Wins by DM O’Connor Last Cut   All firsts. You let me drive. You let me choose the radio station. You rested your huge head against the headrest, closed your eyes. Never a willing passenger. Seventy-five quiet kilometres to the London Regional Palliative…